How is Ethereum moving away from Bitcoin? Bitcoin’s recent performances have been challenging the rest of the market to up its game. However, this has not been possible so far. For instance, while the market’s second-largest altcoin, Ethereum, has been registering some growth, it hasn’t risen on the price charts as much as Bitcoin. What has this led to? Well, this has allowed Ethereum’s short-term performance to weaken.

According to the data provider Skew, the price of Ether relative to Bitcoin has now fallen to a six-month low. 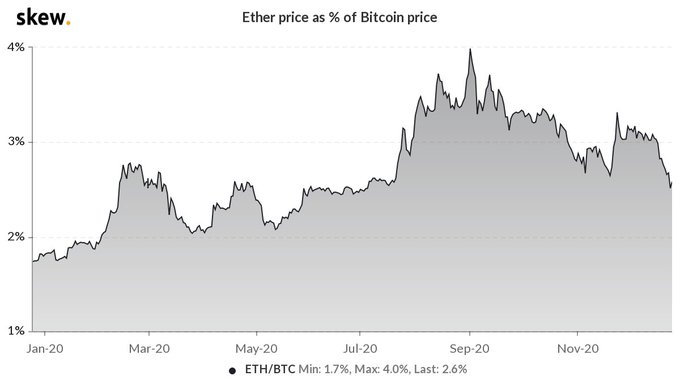 Back in January 2020, ETH/BTC’s levels had fallen down to 1.7% on Skew’s charts. While the same noted a figure of 2.6% at the time of writing, a figure well above January 2020’s reading, the same was at a six-month low. Despite these setbacks, however, the larger ETH community remains positive about the comparative growth of the digital asset.

Ethreum had an upper hand in the month of July, at a time when the digital asset was breaking out of a period of consolidation. At the time, Ethereum’s DeFi boom resulted in the market rallying more than Bitcoin’s. However, as the BTC rally began and the DeFi hype faded, Ethereum’s performance dropped, when compared to BTC.

Since then, the market’s second-largest digital asset has been forging a new path for itself. Since July, Ethereum’s correlation with Bitcoin has been declining. While it did recently see some recovery, the same is still some way away from its levels in the first half of the year. Such a drop in correlation has provided it an opportunity to perform on its own, while even evading sudden sell-offs in the Bitcoin market. This was evident when analyzing the following chart from CoinMetrics,

Going forward, when Bitcoin consolidates, the value of Ethereum may get an opportunity to rally on its own. With developments going forward with pace in the Ethereum ecosystem, the crypto-asset is set to be a major player through its intrinsic value.

2020 has finally set the ball rolling for ETH 2.0 and as it enters its new model, Ether will be burned rather than remitted to transaction validators. This would give way and scope for the deflationary aspect to favor the asset. Ethereum will be able to enable participants in securing transactions and settlements will add to its value.

Such progress has already separated Ethereum from other altcoins in the market. With more of these developments coming, the altcoin might just continue to move independently, especially if its correlation with Bitcoin doesn’t climb to previously-set levels.